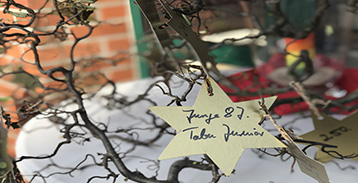 Thanks to the "Aktion Sternenhimmel" campaign, which the Caritas association Lünen-Selm-Werne is organising for the third time this year, at least 400 children can enjoy a present under the Christmas tree this year who would otherwise have gone away empty-handed.

Child poverty is one of the biggest social challenges in Germany. According to the Bertelsmann Foundation, one fifth of children nationwide are affected - including those in the district of Unna.

The Caritas association Lünen-Selm-Werne and the association "Ganz Selm e. V.", which looks after the open all-day day in Selm, are committed to helping precisely these children throughout the year - but at Christmas time they have a particularly great campaign, the "Sternenhimmel" campaign.

Weeks ago, all children and young people who took advantage of the open all-day day and/or offers from the Caritas family support service were allowed to write a Christmas wish on a golden star made of paper.

The stars were collected and have been hanging in the so-called "Sternenhimmel" in the toy shop "Spielen & Träumen" of the Sandmann couple in the old town of Selm since mid-November.

As in previous years, the citizens of Selm can take a star with them, buy the wish written on it worth 20 to 25 euros and then hand it over to the Sandmanns in the shop as a lovingly wrapped parcel.

The project managers have made sure that in the end only the stars that would otherwise have remained unfulfilled landed in the starry sky, as they know from their daily work which families do not have enough money for gifts. Thus, only those children who really need a gift are given one.

The fact that this year even more children than last year will be able to enjoy a fulfilled wish is due in no small part to the company Interhydraulik, which is supporting the project financially for the second year in a row. "Especially now, when the Corona pandemic is aggravating the plight of many families, our help is more important than ever," says managing director Claudius Hirsch, "The more children can unwrap a gift on Christmas Eve, the better.