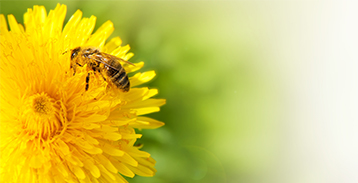 Originally, the Balster family, which runs its farm in Selm, between the Ruhr area and Münsterland, is known for its premium Wagyu meat. In the meantime, however, it is hard to imagine life without the flowering meadows that the Balsters have been regularly planting for several years as a food source and retreat for bees, butterflies, insects in general, and small animals and birds.

Initially, Patrick Balster and his wife had begun to sow herbs and various flower mixtures on smaller parts of their yard area. Since a wide variety of animal species quickly took up residence there, the Balsters gradually planted larger areas of arable land, most recently over 1.85 hectares (roughly the size of 2.6 soccer fields).

A large part of the flowering meadows is financed through "bee meadow sponsorships," in which an area of 100 square meters is planted per sponsorship. Interhydraulik is sponsoring a total of 5,000 square meters of arable land so that further arable land can be transformed into a home for insects and small animals this year.

What is special about this project is that plant protection measures and the use of fertilizers are consistently avoided in order to leave the animals' habitat as natural as possible. For this reason, neither stepping on the meadows nor picking the flowers is permitted. For those who still want to enjoy the blooming meadows, Mr. and Mrs. Balster have set up a picnic corner at the edge of the area.

Anyone interested in becoming a sponsor can find more information on the Balster family's homepage: www.balsters-premium-wagyu.de/werde-pate-einer-bienenwiese-fuer-das-jahr-2021/