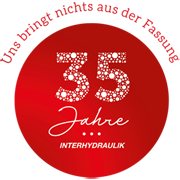 Almost exactly 35 years have passed since the company Interhydraulik was founded by Wolfgang Hirsch.
A lot has happened since then: the one-man operation has grown into a company with a broad product portfolio and more than 230 employees worldwide that can easily keep up with the big players in the hydraulics sector.

Numerous customers and guests who accepted Wolfgang and Claudius Hirsch' invitation to the first interhydraulic in-house exhibition in Selm on May 16, 2019 were personally convinced by the developments of the past years.

Exclusive insights into ongoing operations
Around 1:00 p.m. the guests started in small groups of 6 to 8 people with their "Interhydraulik-sponsors" on a two-hour tour of the company. Wolfgang and Claudius Hirsch had deliberately chosen the time, as the production areas and logistics were very busy around this time: the guests were able to look over the shoulder of the Interhydraulik employees to see how assembled hoses and pipelines are made from individual components, how they are stored and shipped.
In addition to component cleanliness, which Interhydraulik tests and optimizes in its own laboratory, the subject of "investments" was a common theme throughout all areas of the company. In the future, the permanently planned machines will not only increase production volumes, but also produce more components in-house. Another positive side-effect, which the employees are particularly pleased about, is that many of the existing workplaces and workflows will become more ergonomic in the future.

Best practice: Exhibition machine from Wirtgen GmbH shows how and where interhydraulic hoses are used
A special highlight was undoubtedly the W 120 Ri cold milling machine, which Wirtgen GmbH - the world market leader in road construction, road rehabilitation and the extraction of natural stone and useful minerals - had made available to Interhydraulik especially for the in-house exhibition. In the 14-tonne machine, which measures an impressive 10.90 m with the hydraulic folding belt fully extended, the guests were able to see how the Interhydraulic hose material is installed.
Those who didn't shy away from height could even sit in the driver's cab.

Evening event
The evening was then completely dedicated to the anniversary celebration: with good food, drinks and lots of laughter, for which the "Bullemänner" were mainly responsible, the party lasted into the late evening hours.

Due to the positive response, Wolfgang Hirsch announced that the in-house exhibition would become a permanent institution.